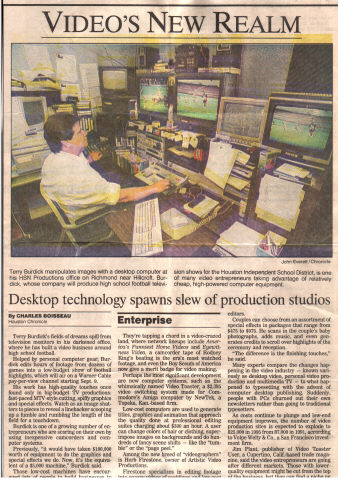 Who is Terry Burdick?

Terry Burdick has produced videos for professional businesses, colleges, high schools, middle and grammar schools. He has produced educational instructional videos for sports as well as for the several different industries such as the construction business.

Terry has produced infomercials, commercials, musicals, professional boxing events for HBO and Telemundo for both television and radio. He has produced pilots for movies (KatyNation i.e.) and for television. He has shot and produced musical videos for singers and bands. Terry was the first in Houston to produce a live sports show which was broadcast over the radio remotely from a restaurant sports bar. He also has interviewed and produced informational shows, such as interviews with George Foreman, Governor Rick Perry and scientists such as Edward Teller of the Manhattan Project.

Terry was one of the first persons to stream live call-in sports internet shows here in Houston. Some of the streamed internet shows Terry produced were and are the HISD Sports Show, The Basketball Show, The Private School Showcase and now, the Chalk Talk Show with Jon Walk.

Terry was also the front runner in the development and production of highlights of game footage and individual and team highlights. Terry would drive around to the various high schools in the greater Houston area and collect footage game footage from the coaches. He then took the game footage back to his studio, edit it down, and then deliver it to the local news stations for their sports news broadcasts.

Terry has shot over 28,000 games and edited and produced over 8,000 highlight videos. Terry's highlight videos have been sent to hundreds of DI, DII and DIII schools and have received the ultimate compliment – a scholarship for the athlete.

Terry's sports expertise began as a young boy at the side of his father who was a professional umpire and announcer at Delmar stadium for 35 years. Terry at the ripe old age of 12 announced his first football action at Delmar and at 17 he announced playoff football at the Astrodome . Terry played 15 years of baseball and 10 years of football.

Terry has an exceptional ability to capture what is needed for the coach and the player alike. His knowledge of cameras, editing equipment, duplicating and graphics is shown through his work.

Recruiters throughout the United States have voiced their respect for Terry and his production of highlight DVDs for their integrity and cutting edge.

Terry now is focusing his attention on bringing his internet shows to television and is currently working with a new television company that has come to Houston. Terry will be announcing the new television partnership in Mid-November 2012.


Drew Webb and Lacrosse
7s for 7 . on the Logo below for more
information.