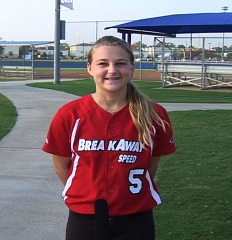 Maddie is a 2016 grad year at St. Agnes Academy in Houston TX.

Maddie completed her freshman year at St. Agnes Academy with a  3.6 GPA and was named to the Honor Roll for both the first and second semester.

As a player at St. Agnes, Maddie was named TAPPS All-District 1st Team, TAPPS All-State 2nd Team, TAPPS State Tournament All-Tournament 1st team, and named as a Houston Chronicle Female Athlete of the Week nominee for her performance in the TAPPS State Finals.

Maddie was also named a Junior Captain for the 2013-14 season.

Maddie has also attended camps at LSU, and University of Houston.