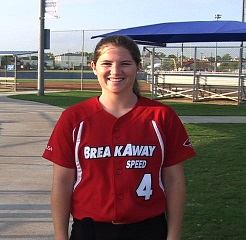 Finished her freshman year with a 3.8 GPA and received Highest Honors and the Exemplary Effort award.

Emily was the starting catcher for Episcopal Varsity softball, but plays centerfield and shortstop for the Breakaway Speed.

Episcopal came in second place in the Southwest Preparatory Conference, and Emily was named All South Zone.

Emily also was the captain and Most Valuable Player on the Junior Varsity Field Hockey team her freshman year.

She is also a member of National Charity League and participates in the Students of Service Club at her school.

Emily finished the summer season with a batting average of .478
On base percentage of .566.