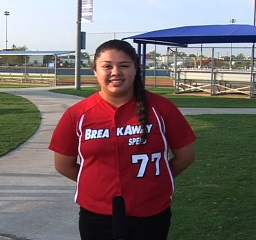 Ajah Soliz an intense first and third base person and confident power hitter.

She began her first season of fast pitch softball at the age of 5 in 6u for the PGSA.

Ajah went Select A-Ball in 8u, where she played starting primary defensive position first Base for the Pasadena Angels, coached by Raymond Garviey.

As a Pasadena Angel, she help lead her team to many victories with her power hitting homeruns earning her a nickname"Bigstick."

Until2011, Ajah was recruited by coach USSSA Hall of Fame, Sandra Mader of the 14u Houston Power Organizations, playing an age group level higher.

Ajah earned her a spot at age 12 yrs old as a starter, playing her secondary defensive position third baseman and power hitter for the 14u HPO and withheld her position the following softball season.

She would then go on to represent 16u Breakaway Speed.  Where she is known for being a dominant comers defensive player and homerun power hitter.

She now has the great pleasure of being Coach by Randy Lusby, Coach Kristin Lusby and faculty of BAS as she continues her softball journey.

Her goal is to someday play college softball, while earning a degree in sports and medicine.

Ajah is a confident, driven, and determined softball player who enjoys being a role model to her siblings, as well as to younger age group softball players, and loves to volunteer her time to give back to the community.  She believes that TEAMWORK and CONFIDENCE is the key to success.